What is Workers’ Compensation Insurance?

Workers’ compensation insurance is designed to cover an employee’s medical costs if they are injured on the job. This insurance also covers a portion of lost wages while they are recovering from the injury and in some cases, covers illnesses. Workers’ compensation is a mandatory insurance,meaning most employers are required to have coverage for their employees.

While three million civilian federal employees and postal workers are covered by The Federal Employees’ Compensation Act (FECA), all other workers must be insured for workers’ compensation by their employer. This coverage is governed separately by each state.

Besides medical costs and a portion of lost wages, worker’s compensation typically covers some expenses related to the on the job injury. For example, the policy provides death benefits for survivors if a worker is killed on the job. Workers’ compensation insurance does not cover injuries sustained in an accident that occurred on the way to or from work but if travelling for the company during working hours or as part of the job it may be in force. This is an important difference, as the Insurance Information Institute (III) states the leading cause of death claims for workers’ compensation is due to traffic accidents that occurred during work related driving trips.

The biggest benefit to businesses carrying workers’ compensation coverage is the protection it affords the company. When a worker is injured on the job and is covered by workers’ compensation the company is protected from lawsuits, regardless of whether the injury was a result of workplace conditions. Likewise, the death benefit for employee survivors generally prevents the survivors from suing for wrongful death due to an accident that occurs while the employee was at work.

Where Do Workers’ Compensation Insurance Laws Come From?

Workers’ compensation insurance laws began over 160 years ago in 1855 when Alabama and Georgia both passed Employer Liability Acts which allowed injured workers to sue their employers for injuries. The employee was required to prove negligence in order to receive compensation. Between 1855 and 1907 26 more states passed similar laws.

Compensating workers for on the job injuries isn’t a new concept; in fact, the US National Library of Medicine states ancient Sumerian tablets dating from 2050 B.C. describe monetary compensation for specific worker injuries as part of the law of Ur. 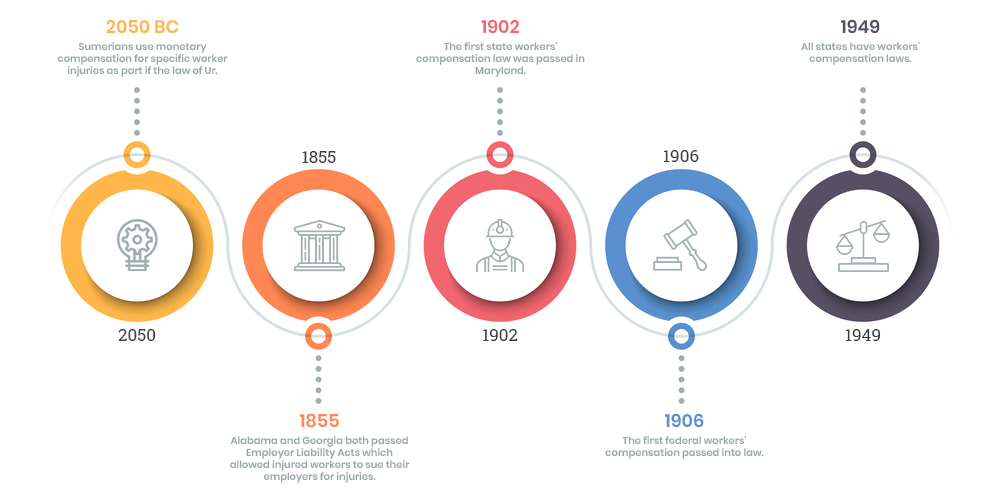 In modern times workers’ compensation was based on English common law and was quite restrictive. During the Industrial Revolution only specific injuries were covered and they had to meet criteria so severe it was called “the unholy trinity of defenses. To be compensated for an on the job accident an employee had to prove:

Contributory negligence: if the employee was in any way at fault for the accident the employer was not liable. For example, if a worker slipped on an oily floor and his arm went into a moving machine he would most likely lose his case as he knew the floor was slippery and could have cleaned it.

The “fellow servant” rule: if the injury occurred due to the negligence or actions of a fellow worker the employer was not at fault.

The “assumption of risk.”: Basically, this was a catch-all rule that stated the worker knew the risks of the job when he accepted the position upon hiring into the company.

Because the laws were so severe it was virtually impossible for a worker (or his survivors) to receive any compensation. Lawsuits were too expensive for the common worker to consider so they worked at their own risk.

Chancellor Otto von Bismarck of Prussia enacted the first Employers’ Liability Law in 1871. The Workers’ Accident Insurance followed in 1884 and was the first modern version of worker’s compensation. The Prussian systems were the model for most social insurance programs, including those in effect in the U.S. today.

While Georgia and Alabama opened the door for employer liability, the first comprehensive employee compensation law in the U.S. was passed in Wisconsin in 1911 and 45 states followed suit before the end of that decade.

Workers’ compensation laws were often opposed by those in the medical profession as the laws regulated the fees physicians were allowed to charge for specific treatments. This opposition faded when Social Security Disability Insurance became law in the 1930s as it gave compensation to persons who could not work due to ailments and injuries that were not work-related. Every applicant had to be medically screened to become eligible and this created a vast expansion for the medical professions.

Although each state holds its own statutes on workers’ compensation they are all modeled after the original Prussian system. The basic tenet is of a “no-fault” insurance, accepting the premise that accidents happen and the consequences must be dealt with. The focus of the system is to deal with accidental injuries as quickly as possible so that costs are covered in an expeditious manner.

All state compensation programs are employer funded, usually by the purchase of insurance but in some cases by setting up a self-insurance account. In some states, the insurance is provided by the state alone. Approximately 80 percent of the U.S. workforce is covered, but most states have criteria for exclusion in the case of small companies as well as agricultural and domestic workers.

Although recently minor changes were made to conform with the Americans with Disabilities Act the basic structure of the workers’ compensation system has remained unchanged since its concept.

Why do Companies need it?

Of course, the main reasons companies need workers’ compensation insurance is that it is required by law. That being said, workers’ compensation protects businesses from employee lawsuits regarding injuries received while at work or while at another location performing work for their employer. It also covers

employees who are driving as part of their job and are in an auto accident.

Here are some other benefits of workers’ compensation:

While employers have an obligation to keep the workplace safe, no matter how great your safety program is accidents happen. Workers’ compensation safeguards your business as well as your employees when someone is injured. 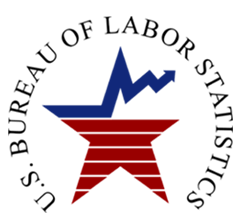 Regardless of your industry once a claim is filed you will no longer have to handle the majority of the details involved. Much like an auto or homeowner policy, the adjuster assigned to your employee workers compensation insurance claim will facilitate the claim. All monies such as medical payments and wage replacements will be paid out by the insurance carrier. Your administrative or payroll department will work as the liaison if the insurance company needs information or paperwork regarding the claim.

As previously stated, workers’ compensation insurance rates depend on the state in which you do business as well as the industry category of your company. According to Insurance Business Magazine California has the most expensive rates in the nation and North Dakota the least costly premiums. The national median rate of workers’ compensation cost is $1.85 per $100 of payroll. For comparison of industries we’ve chosen Washington state as an example to highlight the differences between rates. Washington has one of the lowest rates for workers’ compensation insurance, so yours may vary considerably depending on which state your business is in.

Truck drivers have the highest rate of workers’ compensation claims in Washington state, which is why the average cost for transportation is one of the highest. For drivers, the five most common injury claims are:

The chart below shows standard workers comp rates in Washington State in 2018. Keep in mind, your industry may be categorized differently as these are sometimes generalized. Also, remember if your business is in a different state your rates will most likely be different. This is an overview to give you an idea of overall worker compensation rate costs per employee.

As a whole, the employer cost for workers’ compensation comprised an average of $0.48 per hour for all employees nationwide.

As an employer, you know how vital safety is to your business. You also know accidents happen, and that’s why workers’ compensation insurance is mandatory for most businesses. The most important factor concerning your premium rates is the industry category of your business. Depending on which state your business is in there may be more or less laws concerning what is and isn’t covered under your workers’ compensation insurance policy, and where you live will also affect your rate. That being said, safety practices and employee training can lower your workers’ compensation premium rate because your number of claims will be reduced. Much the same as safe drivers are awarded with lower car insurance rates, the safer your workplace the more chance you have of reducing your premium costs.